Cash In At Work Or Clean Up At Home?
Study Reveals Tasks People Would Rather Do Than Ask for a Raise; How Employee Confidence Has Changed Over Three Years

MENLO PARK, Calif., June 15, 2017 /PRNewswire/ -- Public speaking has long been thought of as a recipe for anxiety, but it's a one-on-one conversation that makes workers feel even less sure of themselves: Asking the boss for a raise. According to the Confidence Matters study from Robert Half, slightly fewer than half of professionals (49 percent) feel confident when asking for a pay increase, compared to 57 percent who feel self-assured when public speaking. The discomfort around these conversations is further reflected in the percentage of survey respondents who – rather than ask for a raise – would prefer to clean their house (36 percent), look for a new job (14 percent), get a root canal (5 percent), or be audited by the IRS (4 percent). 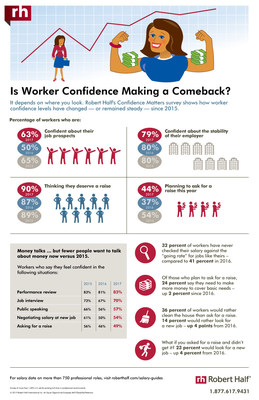 View more information in the infographic and slideshow.

The insecurity around asking for a raise is not new but has changed over time, according to the three-year study: Last year, only 46 percent of professionals felt confident when asking for a raise; in 2015, the percentage was 56 percent.

Robert Half's Confidence Matters research outlines workers' confidence levels and attitudes about a variety of career and salary topics. More than 1,000 U.S. workers employed full-time in office environments were surveyed by an independent research firm for it. The survey was also conducted in 2015 and 2016.

Being uncomfortable talking about money with the boss can be costly over the long term, according to Paul McDonald, senior executive director at Robert Half. "People who are hesitant to talk about compensation may reduce their earning power – not just in their current role but also with future employers. Do your homework on current salary levels. If you're underpaid, role-play the salary conversation with a trusted mentor before scheduling time to meet with your manager."

Although many workers don't relish salary negotiations, 44 percent of survey respondents said they plan to ask for a raise this year, with the primary reason being that their salary hasn't grown with their job duties – the top response for three years running.

Here are three additional takeaways from the Confidence Matters research:

#1: Employees are confident in their companies and job prospects

#2: Knowledge is a power many lack

McDonald noted that the summer season is often prime time for performance reviews. He recommends workers and managers create a lasting dialogue before and after that meeting. "Yearly discussions are not sufficient to review progress, goals, pay and morale," he said. "Schedule frequent check-ins, and don't wait for a yearly review to make a request."

A final note: The number of people who would rather have a root canal than ask for a raise has declined one percent each year since 2015. Workers seem to realize that making the case to earn more cash is less painful than a lengthy – and potentially costly – dental visit. "Let's hope confidence will continue to head in the right direction," McDonald said.

About Robert Half
Founded in 1948, Robert Half is the world's first and largest specialized staffing firm. The company has more than 325 staffing locations worldwide and offers online job search services on its divisional websites, all of which can be accessed at roberthalf.com. For career and hiring advice, visit the Robert Half blog at roberthalf.com/blog.