Robert Half Reveals The Happiest Countries For Workers
Survey: U.S. Professionals Happiest; Germans Most Interested in Their Jobs
-- Two-thirds of employees surveyed in North America, Europe and Australia are generally happy in their jobs.
-- Employees in the United States, Germany and the Netherlands rank highest in terms of on-the-job happiness.
-- German professionals express the highest level of interest in their jobs; Dutch workers have the least stress.
-- Pride in one's company is the top happiness driver in the U.S., UK and Canada; being treated with fairness and respect is the top happiness driver in France, Belgium, Germany and Australia. 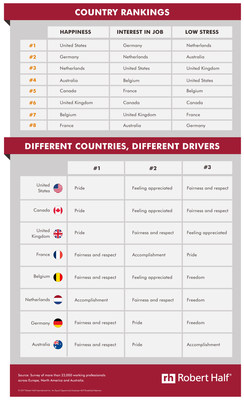 The results are published in a new report: IT'S TIME WE ALL WORK HAPPY.® The Secrets of the Happiest Companies and Employees. For the study, Robert Half worked with leading happiness and well-being expert Nic Marks and Saamah Abdallah of Happiness Works. Marks' team evaluated the levels of employee happiness among more than 23,000 working professionals across Europe, North America and Australia. The report shows the United States, Germany and the Netherlands have the happiest employees among the countries included in the research, ranking 71.8, 71.2 and 69.9, respectively, on a happiness scale of 0 to 100, with 100 being the happiest. The countries studied with the lowest levels of employee happiness are France (63.8), Belgium (65.2) and the UK (67.2).

(Scores are based on an index from 0 to 100, where 0 is the worst possible outcome and 100 the most favorable.)

The research also shows that the top drivers of employee happiness vary by country. In the United States, UK and Canada, the highest-ranking factors are having pride in one's organization, feeling appreciated and being treated with fairness and respect. In France, Belgium, Germany and Australia, being treated with fairness and respect was rated the top happiness factor. In the Netherlands, a sense of accomplishment ranked as the most important driver of happiness.

"Employee happiness is closely connected to organizational productivity and innovation," said Paul McDonald, senior executive director for Robert Half. "Happy employees are typically more engaged and driven to succeed. They aren't just working for paychecks but toward a larger company vision."

The research also examined how average stress and interest levels at work vary across geographies. Among employees surveyed, Germans rate the level of interest they have in their work highest, followed by the Dutch and Americans. Professionals in the Netherlands report the least stress on the job, with Australians ranking second and the UK coming in third.

This study was developed by Robert Half and Happiness Works, and conducted by an independent research firm. The research is based on survey results of more than 23,000 working professionals who are currently employed on a full- or part-time basis, across eight countries, with the results segmented by geographic location.

Founded in 1948, Robert Half is the world's first and largest staffing firm, with more than 325 staffing locations worldwide. We believe working happy is the only way to work, and we have made it our mission to help people find fulfilling jobs and help companies build happy, productive teams. Find out more at https://www.roberthalf.com/its-time-we-all-work-happy.