Happier During The Holidays?
Half of Workers Jollier on the Job During the Holiday Season, but More Than One-Third Also More Stressed
- Workers in San Francisco and New York most merry; those in Cleveland and Philadelphia least joyful
- Pittsburgh and Philadelphia home to the most frazzled professionals during the holidays
- Balancing year-end festivities and work obligations biggest stressor for employees
- Higher year-end bonuses, more flexible work schedules top professionals' wish lists

MENLO PARK, Calif., Nov. 6, 2017 /PRNewswire/ -- 'Tis the season to be jolly — off and on the clock. In a recent survey of professionals from staffing firm Accountemps, more than half (51 percent) said they are more cheerful at work during the holidays. But many are also busier, with 35 percent of respondents saying they are more stressed on the job this time of year. 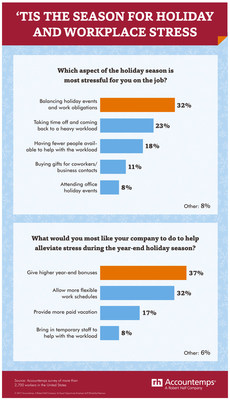 What makes workers weary during the most wonderful time of the year? Professionals polled cited balancing holiday events and work obligations (32 percent), taking time off and coming back to heavy workloads (23 percent), and having fewer people on the job to help (18 percent) as the most stressful aspects of the holiday season.

View infographics with city rankings of happiest and most stressed workers during the holidays, as well as top stressors for employees.

"Between professional responsibilities and personal commitments, it's all too easy for employees to become overwhelmed during the holiday season," said Michael Steinitz, executive director of Accountemps. "Managers can support their teams by allowing more flexible schedules and bringing in temporary staff to assist with year-end projects."

Steinitz added, "Workers should take time off to enjoy the season with family and friends and avoid burnout that could carry over into the new year."

As the holidays approach, Accountemps offers the following tips to prevent on-the-job fatigue:

About the Survey
An independent research firm surveyed more than 2,700 workers from 27 major U.S. cities to determine which cities have the happiest and most-stressed employees during the holiday season, as well as the impact of holiday stress.

About Accountemps
Accountemps, a Robert Half company, is the world's first and largest specialized staffing service for temporary accounting, finance and bookkeeping professionals. The staffing firm has 325 locations worldwide. More resources, including job search services, can be found at roberthalf.com/work-with-us/our-services/accountemps.