Survey: Nearly Half Of CFOs Don't Have A Succession Plan
Most Say It's Because They're Not Planning to Leave Soon

MENLO PARK, Calif., Dec. 20, 2018 -- Change management is always a major concern for organizations, but few challenges are more disruptive than an executive departure. In a new survey from Robert Half Management Resources, only 52 percent of CFOs said they have identified a successor for their position. The research suggests small businesses (20-49 employees), in particular, may be less prepared to deal with potential leadership changes, with only 37 percent of financial executives at those companies citing they have an heir apparent. 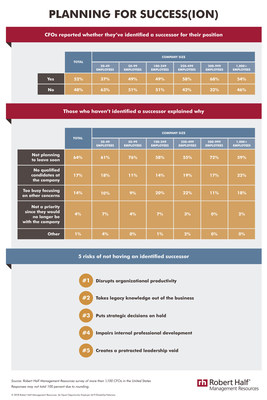 Of the respondents without a succession plan, 64 percent said it was because they were not planning to leave the company in the near future. Other reasons included a lack of qualified candidates within their current organization (17 percent), focus on other priorities (14 percent) and lack of concern as the executives would no longer be with the company (4 percent).

View the Planning for Success(ion) infographic, which includes the survey results by company size and highlights five risks of not having an identified successor, at roberthalf.com/blog/management-tips/planning-for-succession.

"Succession plans are critical but often overlooked as executives focus on other pressing issues," said Tim Hird, executive director of Robert Half Management Resources. "Yet for a business to weather change and continue to run smoothly, it's imperative to identify and train potential successors, not just for C-level positions, but roles throughout the organization.

"Succession planning is not just about continuity," added Hird. "In addition to preparing the company for inevitable change, it creates a culture of professional development, enhances knowledge-sharing between existing leadership, and helps identify and retain future leaders."

Robert Half Management Resources identifies the potential pitfalls for organizations that lack a succession plan:

About the Research
The online survey was developed by Robert Half Management Resources and conducted by an independent research firm. It is based on responses from more than 1,100 CFOs at U.S. companies with 20 or more employees.