Survey: 42 Percent Of Job Applicants Don't Meet Skills Requirements, But Companies Are Willing To Train Up
- More than three in four professionals would apply for a job even if they aren't qualified
- 84 percent of companies are willing to hire and train a candidate who lacks required skills
- 62 percent of employees have been offered a position when they were underqualified; this has happened most frequently in Charlotte, San Diego, Austin and Washington, D.C.

MENLO PARK, Calif., March 19, 2019 /PRNewswire/ -- Should professionals mind the skills gap when applying for a position? In new research from global staffing firm Robert Half, HR managers said 42 percent of resumes they receive, on average, are from candidates who don't meet the job requirements. In a separate survey of workers, 78 percent admitted they would submit for a role when they don't match all the qualifications. 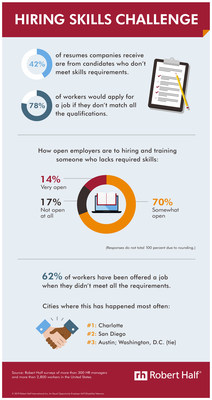 Luckily for applicants, 84 percent of HR managers reported their company is open to hiring an employee whose skills can be developed through training.

Workers were asked, "Would you still apply to a job if you didn't meet all of the qualifications on the job description?" Their responses:

HR managers were asked, "How open is your company to hiring and training an employee who doesn't meet the skills requirements for a position?" Their responses:

"When it's challenging to find candidates who check off all the boxes, companies may need to re-evaluate their job requirements to hire the right talent," said Paul McDonald, senior executive director for Robert Half. "Workers can be trained on duties for a role, but individuals with the right soft skills and fit with the corporate culture are often harder to come by."

McDonald added, "Professionals shouldn't rule themselves out for a position if they don't fulfill all the criteria. However, applicants need to make a strong case by highlighting past results, transferable skills and a willingness to learn."

About the Research
The online surveys were developed by Robert Half and conducted by independent research firms. They include responses from more than 300 HR managers at U.S. companies with 20 or more employees and more than 2,800 workers 18 years of age or older and employed in office environments in 28 major U.S. cities.