Survey: 50% Of Workers Say Their Commute Is Stressful
-- Miami, San Diego and Austin employees are most stressed over traveling to the office, according to Robert Half study
-- 45% of workers feel their commute is too long
-- Professionals in Washington, D.C.; New York; and Houston cite the longest trips

MENLO PARK, Calif., Nov. 5, 2019 /PRNewswire/ -- Are employees stressed out before they even arrive to the office? In a new survey from global staffing firm Robert Half, half of professionals (50%) said traveling to and from work is stressful. 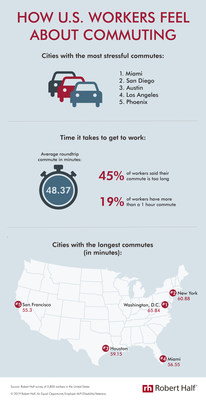 In addition, 45% of respondents lamented that their trip to the office is too long, up from 30% in a similar 2017 survey. Professionals said they spend an average of 48.37 minutes commuting each day, and nearly one in five (19%) stated their travel time exceeds one hour.

View an infographic of cities with the most stressful and longest commutes.

"When workers have difficult commutes into the office, their engagement and productivity can suffer the rest of the day. This may affect staff satisfaction and retention in the long run," said Paul McDonald, senior executive director for Robert Half. "With the current employment environment favoring job seekers, organizations can't afford to ignore the issue and lose their best team members to other opportunities."

For more tips on how to deal with a bad commute, visit the Robert Half blog.

The online surveys were developed by Robert Half and conducted by independent research firms. They include responses from 2,800 workers 18 years of age or older and employed in office environments in 28 major U.S. cities and more than 2,800 senior managers at U.S. companies with 20 or more employees.

Founded in 1948, Robert Half is the world's first and largest specialized staffing firm. The company has more than 300 staffing locations worldwide and offers job search services at roberthalf.com. For additional management and career advice, visit the Robert Half blog at roberthalf.com/blog.